The Government of Saskatchewan is boosting financial support to the province’s tech sector in the 2020-21 Budget, including $400,000 to the Saskatoon lab working on a vaccine for COVID-19.Innovation Saskatchewan will provide new funding to the Vaccine and Infectious Diseases Organization (VIDO) toward construction of a vaccine manufacturing facility.  This funding is in addition to the $3.8 million provided in 2019-20 to support the organization’s work in finding a vaccine for COVID-19.“The Vaccine Manufacturing Facility will be the first of its kind in Canada,” Minister Responsible for Innovation Saskatchewan Tina Beaudry-Mellor says.  “It will accelerate the development and commercialization of new vaccines, consistent with VIDO’s role in National Emergency Response, and underpin Saskatchewan’s role in the global effort to control the coronavirus.” 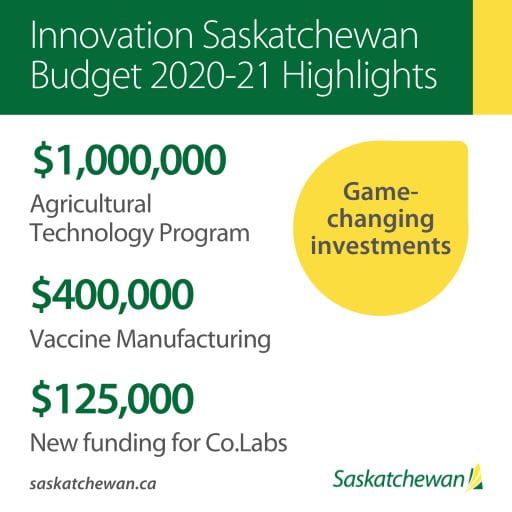 New investments in the provincial tech sector also include:

The changes will support growing numbers of manufacturers and tech start-ups in Saskatchewan, involved in game-changing technologies in agriculture, healthcare, education, energy, mining and manufacturing.  A study released in May shows Saskatchewan’s tech sector contributes nearly $5 billion each year to the province’s economy.  The goal in the Saskatchewan Growth Plan is to triple the sector by 2030.“Saskatchewan’s tech sector has seen significant investment in the last three years with more than $114 million of private sector funds deployed in 2019 alone – more than the previous five years combined,” Beaudry-Mellor says.  “Building on those companies’ efforts, we believe we have an opportunity to lead the country in new and innovative technologies in many sectors and specifically in agriculture.”Program details for the new agricultural technology fund will be released this summer.  The Co.Labs investment builds on current success.  Since launching in 2017, Co.Labs has worked with 100 companies, attracted more than $8.0 million in private equity investments and created more than 170 jobs.Meantime, VIDO announced promising results in late May and moved another step closer to human clinical trials for a COVID-19 vaccine, with funding support from the Government of Saskatchewan and Government of Canada.-30-For more information, contact:Scott BrownInnovation SaskatchewanReginaPhone: 306-787-0355Email: scott.brown@gov.sk.ca